(Provincetown, MA) – October 1, 2018 – Mayflower II is coming to Provincetown in September 2020 as part of the 400th anniversary of the first landing of the Pilgrims in Provincetown. Announced by the Provincetown 400 Task Force, the visit is slated for September 7 to September 14, 2020. The iconic ship – a major exhibit of Plimoth Plantation – is a full-scale reproduction of the sailing vessel on which the English Colonists arrived in 1620. Pilgrim Monument and Provincetown Museum (PMPM) oversees Provincetown 400 commemoration activities that include events, programs and fundraising to promote awareness of the arrival of the Mayflower Pilgrims and their interactions with the Wampanoag nation. The word commemoration is used regarding the quadricentennial to recognize the importance of the relationship between the colonists and the Wampanoag nation. 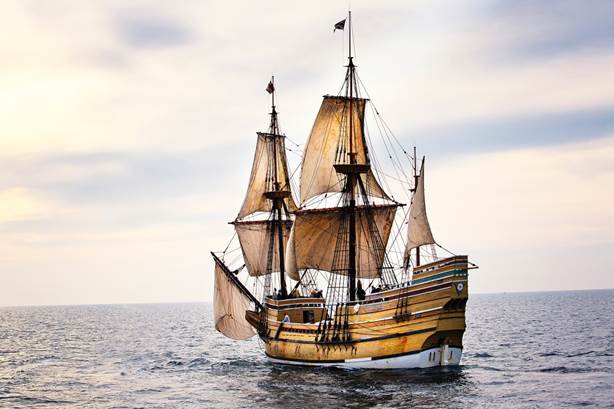 “We expect thousands to come to Provincetown to visit Mayflower II and to learn about the beginning of the Pilgrims’ story. It began here in Provincetown where they established the first governing document of the colonists known as the Mayflower Compact,” said Dr. K. David Weidner, Executive Director of the PMPM. “Mayflower II’s visit will be one of the highlights of the 400th anniversary commemoration and is made possible through a partnership with Plimoth Plantation, and for that we are very thankful.”

Mayflower II, a living memorial to the Pilgrims, was intended as a gift from the people of England to the people of America to honor the UK/USA alliance during World War II,” said Ellie Donovan, Executive Director of Plimoth Plantation, “This historic ship has an exciting educational mission and we are delighted to be working with Provincetown 400 on this commemoration.”
Mayflower II is tentatively scheduled to arrive in Provincetown Harbor on or about Monday, September 7, 2020 and to depart on Monday, September 14, 2020, pending circumstances of weather, tide or other reason that may reasonably interfere with the safe transport of the vessel. During the visit, Mayflower II will be the setting of the historical re-enactment of the Signing of the Mayflower Compact in Provincetown Harbor in 1620. This re-enactment will enable the public to witness the history that happened in Provincetown waters in 1620. Throughout the week, Mayflower II will be open for public visitation.

Other activities planned for Provincetown 400 include a signature event that the PMPM and the Town of Provincetown is hosting for the General Society of Mayflower Descendants (GSMD) during its 2020 Congress beginning on Friday, September 11, 2020. The commemorative event for GSMD will occur on Sunday morning, September 13, 2020 with a Memorial Service and Wreath Laying in the harbor, followed by a luncheon and program at the base of the Pilgrim Monument.

About the Pilgrim Monument and Provincetown Museum
Dedicated in 1910, the Monument commemorates the first landing of the Mayflower Pilgrims in Provincetown in 1620. Here they signed the historic Mayflower Compact, the first agreement to establish a government by the people in the ‘new world;’ which became the cornerstone of American democracy. They explored the Cape for five weeks before sailing on to Plymouth. At 252 feet, the Monument is an engineering marvel and the tallest granite tower in the United States. Visitors can climb the Monument’s 116 steps and 60 ramps at a leisurely pace and enjoy a breathtaking view of the entire Cape and visit our webcam for a live “View from the Top.” The Provincetown Museum at the base of the Monument presents engaging exhibitions of important chapters in our national heritage and the Town’s history and oversees Provincetown 400, the committee developing the commemorations for 2020, the 400th anniversary of the Mayflower voyage and landing in Provincetown.  Pilgrim Monument and Provincetown Museum is a non-profit educational, tax-exempt 501(c)(3) organization. For more information please visit pilgrim-monument.org.

Plimoth Plantation is the living history museum of the United States’ foundation in historic Plymouth, Massachusetts. A private, 501(c)(3) not-for-profit with an educational mission, the museum provides engaging encounters with history built on thorough research about the Wampanoag and English communities in the 1600s. The Museum is open daily from 9 a.m. to 5 p.m., 7 days a week, from mid-March through the end of November. The museum is supported by admission fees, contributions and memberships. For more information, please visit www.plimoth.org.

Founded in 1897, The Mayflower Society is a 501(c)(3) non-profit organization with national headquarters in Plymouth, Massachusetts. Membership requires proof of lineage from one of the passengers who traveled to America on the Mayflower in 1620. Its mission is to educate the public about the Mayflower Pilgrims and their impact on Western civilization and to uphold the highest standards of genealogy research in verifying the lineage of the Pilgrims. We operate a genealogy research library at our Plymouth headquarters and publish the Mayflower Families Through Five Generations, also known as the “Silver Books” because of their distinctive covers. Connect with us: www.theMayflowerSociety.org; Facebook.com/GSMD; Instagram.com/themayflowersociety; twitter.com/gsmd