Southernmost on the coast lies Bristol County, home to the great mill town of Fall River and the whaling city of New Bedford.

The city of Fall River has undergone strategic urban renewal in the recent past, saving many of the mills and factories and putting them to modern uses, from new manufacturing to museums to malls. Some of the greatest shopping in the country is in Fall River’s factory outlets and not to be missed. The historic sites are worthy of note including Lizzie Borden’s house – now a Bed & Breakfast for the more adventurous! and Battleship Cove, home to several decommissioned major ships and subs, all open to the public.

In New Bedford, the original whaling village has been well preserved and cobblestone streets give way the the shore where you can visit the The New Bedford Whaling Museum, which includes boarding a half-scale model of a whaling vessel and the Seamen’s Bethel, a chapel for whalers and their families and the one of the inspirations for Herman Melville’s Moby-Dick.

Plymouth and Plimouth Plantation is the place where the Pilgrims landed in North America in 1627. The Plymouth Rock is still there for all to experience and enjoy and the working village of the Olde Plimouth Plantation, scene of the first Thanksgiving, is a living museum and testament to the tenacity of the original settlers and the kindness and guidance of the Native Americans. The Mayflower II, a full-scale reproduction of the Pilgrim’s ship is open to the public and sometimes sails. Whale watching is the best in the country – the increased whale population guarantees sightings just about every day. And don’t forget the Cranberry World Visitors Center. Here you’ll find a museum which explains the history, harvesting and marketing of the small, red fruit which is a must at holiday times and you’ll see the industry in action as this is the home of the Ocean Spray company.

CAPE COD AND THE ISLANDS 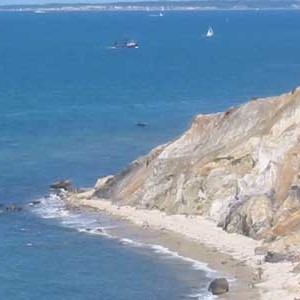 The Cape is the long arm of Massachusetts, a penninsula which juts 75 miles out into the Atlantic. Beginning at Hyannis, a playground for the rich second only to Newport Rhode Island and Woods Hole, the home of the world’s foremost oceanographic institute, the Cape continues on and on, village after village, offering the richest history, scenery, swimming, boating, fishing and seafood in the nation, all in a quiet, relaxed setting. The more adventurous can head all the way out to the tip and Provincetown,  possibly to explore watch tower hundreds of feet high which is open to the public. Here the Pilgrims spent 5 weeks exploring the tip of Cape Cod, before they sailed on to Plymouth.

Deep sea fishing charters are plentiful on the Cape and provide memories that will last a lifetime as well as the catch of the day. There is a lively arts community, from serious painters exhibited in fine galleries to the cartoonists and cariciturists who dot the wooden sidewalks in front of the many antique shops and fine gift shops. There is world-class summer stock theatre here as well as a rich musical community. Provincetown is also known as a gay mecca for its longtime tolerance and defense of individual rights going back over two centuries. And, if that’s not enough, the most spectacular sunset in the East is yours for the watching from anywhere along the miles and miles of world-class sandy beachs, harbor side for quiet seas and ocean side for the more adventurous.

Martha’s Vineyard is the closest of the two major islands off the coast of Massachusetts, easily reached by ferry from Woods Hole, by air or by sea. The original town of Oak Bluffs is famous for its “gingerbread” Victorian village, the most detailed and well-preserved settlement of its kind. There you can visit the oldest working carousel in the country and rub elbows in the bars, clubs and restaurants with the island’s famous residents and summer colonists, from rock stars to presidents. Vineyard Haven is a turn of the century port and the modern center of the island. Edgartown, once a whaling port, is now home to the rich and famous who live in the stately summer palaces of the golden age. The beaches on the island can’t be beat and the sailing, swimming and fishing are all world class.

Nantucket, which lies thirty miles out to sea, is more like stepping into another time. Once a major whaling center, the island is now dedicated to a peaceful way of life and the preservation of the many historic sites. The dining is world class year-round. The whaling museum is the best in the country. And access to the sea is unparalleled. Cruises, day and evening, are available and affordable. Deep sea fishing is the name of the game here as you’re already out in the middle of the ocean! The sailing is great year -round and the beaches and swimming are out of this world.

Take a trip to where it all started – set foot on the very spot where the first settlers landed and enjoy all that this country has become out on old Cape Cod.