THE CITY OF BOSTON 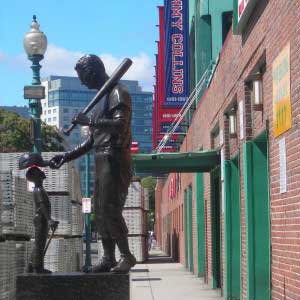 Comprising the major metropolis of Boston, the college town of Cambridge and the North Shore (the fishing, historic, beach and bedroom communites dotting the coastline up to the New Hampshire border), one can experience just about everything in terms of adventure, history, entertainment and culture which this country has to offer.

Known as “The Cradle of the Revolution” because it was the scene of such important early events in our history as the Boston Tea Party, the battle of Bunker Hill and the ride of Paul Revere, Boston offers “The Freedom Trail” for those interested in experiencing the rich history behind this beautiful city. This three mile walk takes you past 16 historic locations in the city tracing the steps of our forefathers, winding down the narrow cobblestone streets of yesteryear, past the old State House and the North Church where Paul Revere hung his lanterns. One stop is Faneuil Hall, an indoor mall with dozens of restaurants and stores in the location of the first meeting hall of our country’s founders. The U.S.S. Constitution – “Old Ironsides” – the oldest commissioned warship in the world is open to the public for tours and sometimes sails. And you’re right next to Bunker Hill, where if one climbs the historic monument, you are afforded the greatest panoramic view of the area available. The Boston Common and the Public Garden offer a quiet, green retreat from the hectic city life and are a lively addition to the town much the same way Central Park serves that role in New York City.

History, science and the arts abound: The Museum of Science, Museum for the Fine Arts, the Hayden Planetarium, the historic Boston Public Library, the Institute of Contemporary Art, the Isabella Stewart Gardner Museum, the JFK Library, Science Park (on a man-made island in the middle of the historic Charles River), the New England Aquarium, the Franklin Park Zoo and the world-famous Computer Museum. All this in one place! Need we say more?

Downtown architecture is world-class and world-famous from the Prudential Tower to the Hancock buildings – new and old, to the stately mansions on Beacon Hill and the Victorian Townhouses on Commonwealth Ave.

All this plus the Boston Red Sox, the New England Patriots, the BSO and the Pops!

Just across the Charles River from Boston lies the City of Cambridge, the intellectual center of the modern age. Home to MIT (The Massachusetts Institute of Technology) and Harvard University, Cambridge is also an arts colony with some of the most exciting galleries and performance spaces in the country. Just in Harvard Square, for instance, lie the two oldest continuously running coffeehouses in the the country: Passim (the old Club 47) and the No-Name Coffeehouse, the birthplace of the modern folk music era and home to the earliest performances of such giants as Joan Baez, Tim Hardin, Bob Dylan, Eric Andersen and Joni Mitchell. And due to the large student and blue-collar populations and ethnic diversity of the area, Cambridge is a smorgasbord of great restaurants at truly affordable prices encompassing cuisines from all over the planet with a bent on the great local produce and fresh seafood brought into the harbor. Plan a day or two just to visit this great town across the river.