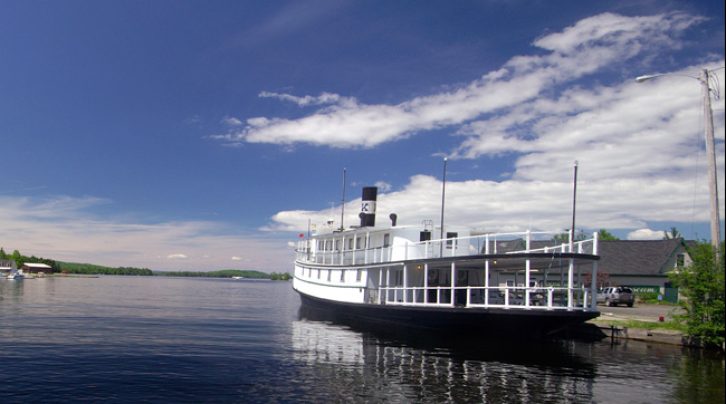 Katahdin Cruises and the Moosehead Marine Museum invite you to experience history. Step aboard KATAHDIN for a leisurely cruise to enjoy the natural beauty and history of Moosehead Lake. Our abundant wilderness is apparent. All are also welcome to browse the shoreside museum from 10am – 4pm, Monday thru Saturday.

The three hour cruise travels up the lake 12 miles to the widest part of the lake just north of Deer and Sugar Islands, the largest islands on the lake. On a clear day the mountain views are incredible with Mount Katahdin (Maine’s largest) in the distance.

The four and one-half hour Mount Kineo cruise travels approximately 20 miles up the lake. At the northern terminus of the trip, KATAHDIN passes directly beneath the 800 foot cliffs of Mount Kineo. Peregrine falcons are frequently sighted soaring above the mountain. This area is also the deepest section of the lake at 254 feet.

Our mission is to preserve and operate KATAHDIN as a “living museum” for the benefit of our community, region, and future generations.

The Moosehead Marine Museum invites you to experience history. Step aboard the KATAHDIN for a leisurely cruise to enjoy the natural beauty and history of Moosehead Lake. A National Historic Landmark, the KATAHDIN, more than any other remaining piece of Moosehead’s history, truly reflects the many eras, interests, and businesses of the region’s past and present.

Built in 1914 by the young shipyard Bath Iron Works, the steamboat KATAHDIN was later converted to diesel, and has become the final link to a bygone era. Steamboat history began on Moosehead Lake in 1836. As many as sixty boats once steamed up the lake carrying passengers, livestock, mail, supplies and equipment. Steamboats were the only means of transportation to the large resorts such as Mount Kineo, as well as the small hunting camps and villages around the lake.

By the late 1930’s, with the development of roads around Moosehead, only the KATAHDIN remained. Used as a towboat to haul booms (rafts) of logs until 1975, she participated in the nation’s last log drive and was then designated a National Historic Landmark. In 1976, the Moosehead Marine Museum was founded and it acquired the KATAHDIN as its star exhibit. In addition to the KATAHDIN, the Museum has an extensive collection of steamboat memorabilia and early photographs of the Moosehead area. The Marine Museum is dedicated to preserving the glorious days of steamboating and the heritage of the Moosehead Lake Region.

KATAHDIN is owned and operated by the Moosehead Marine Museum, a non-profit organization.Considerable sums of money have been raised from very generous donors to allow KATAHDIN to continue sailing.For more information about the history of steamships on Moosehead Lake, visit the Maine Memory Network at