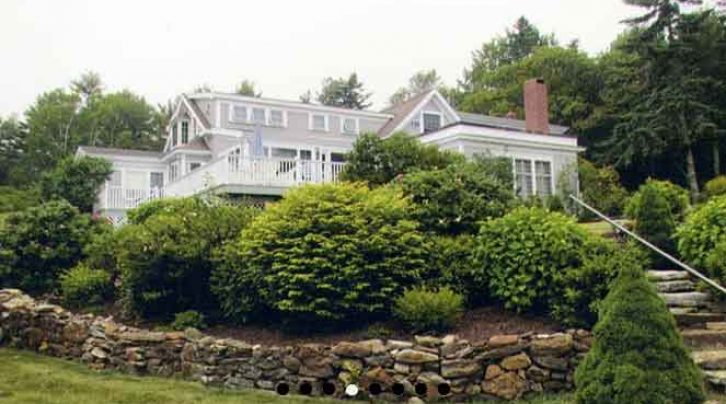 This picturesque Midcoast Maine Bed and Breakfast located on Georgetown Island was the original home of Walter Reid, the donor of Reid State Park in Georgetown, and later his daughter Louise R. Butler. It is now owned by Mr. Reid’s great granddaughter Penny, and her family.

After a hearty breakfast, spend the day at the beach,enjoy lobsters at Five Island Lobster and come back to the Mooring sit on the deck watch the sunset or read and relax in the Spanish room before turning in for a good nights sleep listening to the waves crashing on the rocks.? We are a non-smoking inn.

The Mooring Bed and Breakfast was the former home of Walter Reid, the donor of Reid State Park and later owned by his daughter, Louise Butler. The Mooring was a private home and was newly renovated in 2001 and opened as a B&B in May of 2002. It is now owned by his great granddaughter Penny Barabe and her family.

Penny and family moved to Maine from Cape Cod in 1977 after spending many summer vacations here. Penny spent every summer at her Grandmothers house since the age of 4. Their 3 sons, Scott, Todd and Jason still live in the area. Grandson Reid and Grandaughter Anna spend much time at the Mooring and have made many friends with the guests.

There are beautiful stone walls and gardens that have been here for years and the driveway is lined with large hydrandea trees over 75 years old, that bloom bright white every Summer and turn a dusty rose in the Fall.

We have many beautiful weddings here at the Mooring, with a ceremony held under the pergola at the water’s edge and the reception with a tent on our lawn.