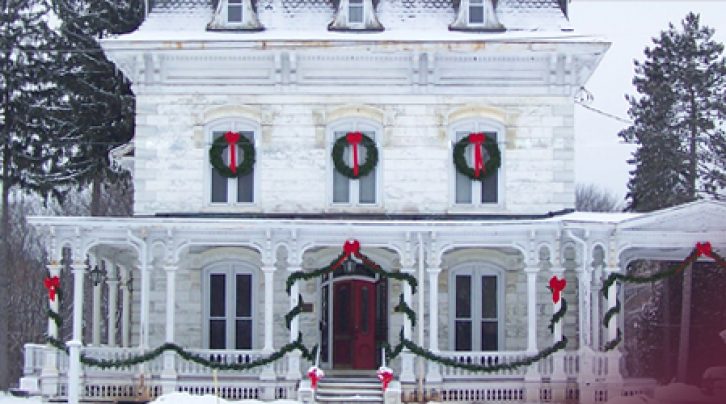 Experience historic elegance in this circa 1867 French Second Empire Vermont Bed & Breakfast on the village green in Fair Haven, Vermont.  You are invited to come unwind in the opulence of a 19th century marble mansion and marvel at twelve foot high ceilings decorated with intricate Georgian style plaster crown moldings & ceiling medallions, and the twin marble fireplaces in the double-parlor with gleaming herringbone pattern wood floors and crystal chandeliers.

We are offering a unique experience by taking in the history of the mansion.  Built in 1867 in the French Second Empire style with mansard roof by relatives of Revolutionary War hero Ethan Allen, the Allen family was one of Vermont‘s first marble investors.  At the time, marble was readily available and inexpensive to harvest so Ira Allen built a grand home made of Vermont marble. The intricacies in mansion make it unique in character and grandeur.  From hand carved marble mantles around seven fireplaces to the plaster crown moldings, step back in time when cost was measured by the finished product and not by the hours to complete the job.

The big marble house was built in 1867 by the Honorable Ira C. Allen, a prominent businessman of the Fair Haven community; born in Bristol, Vermont in 1816, Allen was the grandson of a cousin of American Revolutionary War patriot Ethan Allen.  He was married to Mary E. Richardson, daughter of C. Richardson of Geneva, New York, in 1855 and they had four children: Charles, Ira, Jessie, and Francis.

Ira C Allen
A banking and railroad magnate, Allen had interests in marble, slate, and real estate.  He also served as a state representative, 1861-62 and a state senator, 1867-68 in the Vermont State Legislature and was one of the founders of the Vermont Academy in Saxton’s River, Vermont.  He served on the Academy’s board of trustees for many years.

In 1866, Ira C. Allen bought the property from Judge William Kittredge who had a house on the property.  This house was removed to another site.  Moving houses was common in those days because it was cheaper than building or buying.  The house was placed on rollers and as horses pulled it, the rollers were moved from back to front.  The marble came from Proctor and according to the story, each piece of marble was numbered and lay on the lawn for quite some time before it was used in construction.

The parlors were not furnished.  Two hot air furnaces and coal stoves were in the dining room.  In 1870 with two large cisterns well water was brought in and pumped to the second floor.  With running water on the second floor baths and toilets were put in.  Two years later the town of Fair Haven put in water works.  The parlor was furnished at a cost of $4,000.

At first the marble house was piped for gas with kerosene lights; then in 1893 the house was wired for and became the first house in Fair Haven to have electricity.  All the marble was brought from West Rutland by ox teams and had sheet lead put in between.

In 1903 Jessie conveyed it to George Vail for the sum of $1.00.  George was married to Elizabeth Allen, a relative of the Allen family.  When Elizabeth (Aunt Libby) Allen Vail died, the marble house was taken over by Aaron Vail Allen, Sr. and his wife Rebecca.  Their son, Sherman Vail Allen became the next in line and upon his death in 1975 the mansion was sold and left the Allen family.

The mansion changed hands a number of times between 1975 and 2009, being both a private residence and at times an inn.