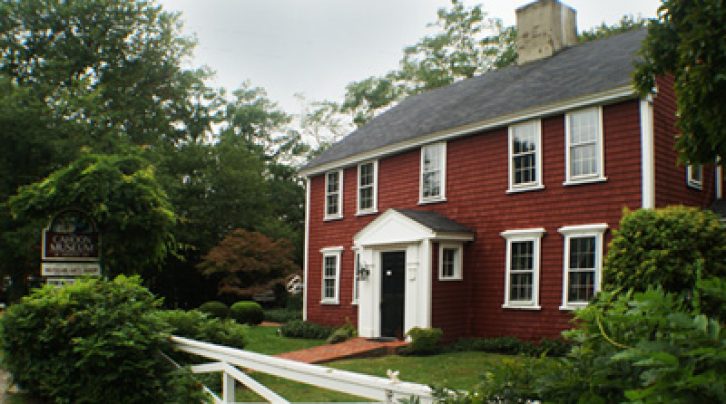 The mission of the Cahoon Museum of American Art is to promote love and enjoyment of the visual arts through exhibits, educational programs, and continuing development of its permanent collection. The museum both celebrates the legacy of Cape Cod folk artists Ralph and Martha Cahoon, displaying their art and preserving the historic building that was their home and studio, and embraces the full vitality of American art with emphasis on past and present artists of Cape Cod and the Northeast.

Early Cotuit resident Ebenezer Crocker began building the stately Colonial Georgian home that constitutes the original part of the museum in 1775. By 1821, his grandson Ezra Crocker was operating the place as a tavern, an important overnight stop on the stagecoach line between Sandwich and Hyannis. Features dating from this period include wall stenciling in the front stairwell and a hinged wall on the second floor that could be raised to provide one large meeting space or lowered to create two smaller rooms for lodgers. Fireplaces in four of the seven galleries and old floorboards also delight our visitors.
The building continued under Crocker ownership for five generations, or until the 1920s. In 1945, Ralph and Martha Cahoon purchased the big house as their residence and studio, using many of the rooms for the display of their decorated furniture and antiques. It was here, too, that they lived and worked during all the years from 1953 on, when they were making their mark as folk artists. Following Ralph’s death in 1982, local art collector Rosemary Rapp purchased the house with a vision of opening a museum, a dream that bore fruit in 1984 with the founding of the Cahoon Museum of American Art.
Today, the museum is a showcase for a stellar collection of the folk paintings of the Cahoons, as well as a choice collection of 19th-, 20th-century and contemporary American art. Highlights include folk portraits by William Matthew Prior and Erastus Salisbury Field; marine paintings by James Buttersworth, William Bradford and Xanthus Smith; landscapes by John Joseph Enneking, Dwight Tryon, Ralph Blakelock, Benjamin Champney and John Francis Murphy; and an exceptional fruit painting by Levi Wells Prentice. Among the early 20th-century artists represented are Mabel May Woodward, Reynolds Beal, William Paxton, Frank Carson and Frank W. Benson. In addition, the museum has developed a fine reputation for presenting a lively schedule of changing exhibitions devoted to many aspects of American art.